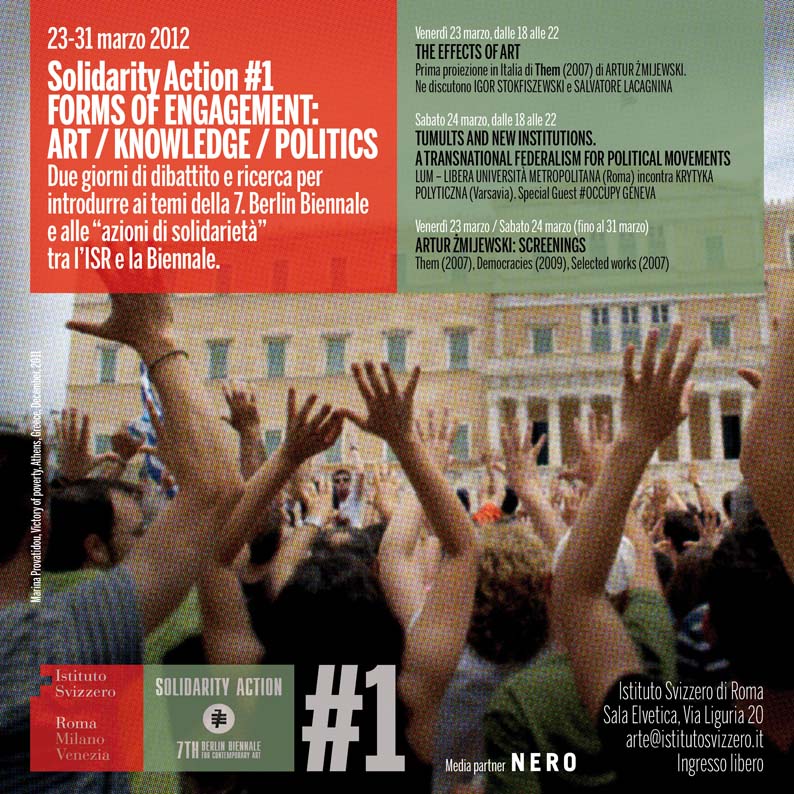 For the 7. Berlin Biennale, the curator Artur Żmijewski has created a political space where to explore the effects of art in society and the connections with the current social and political situations.
In this scenario, the Istituto Svizzero di Roma and other European art institutions that share this approach have been invited to engage in “solidarity actions” in accordance with the theme of the BB7, with the aim of giving visibility to a network of organizations acting in various countries, in solidarity with each other and with the Biennale.
The 7. Berlin Biennale will take place from April 27 to July 1° 2012 and is curated by Artur Żmijewski together with Associate Curators Voina and Joanna Warsza. The Biennale is organized by KW Institute for Contemporary Art and funded by the Kulturstiftung des Bundes (German Federal Cultural Foundation).

SOLIDARITY ACTION #1
FORMS OF ENGAGEMENT: ART / KNOWLEDGE / POLITICS
In recent years, the debate on the new forms of interaction between art, knowledge and politics has intensified. All this has produced a simultaneous emergence of numerous independent initiatives in Eastern Europe, with the aim of connecting the fields of art, social sciences and political activism.
The first “solidarity action” organized by the Istituto Svizzero di Roma consists of two days of debates to create a bridge between the experiences of Eastern Europe – already presented and discussed in the context of the Berlin Biennale – and the activities of the Roman collective ESC, through the experience of the selftraining laboratory and research LUM – Libera Università Metropolitana.
For an introduction to the Berlin Biennale and in particular for the series of “solidarity actions” that will be activated by the Istituto Svizzero di Roma, on March 23 Igor Stokfiszewski (literary critic, editor and playwright, member of the 7. Berlin Biennale team) and Salvatore Lacagnina (Head of Arts Programming at the ISR), will discuss the forms of responsibility and possible intervention of art in the social and political realities, through the work of Artur Żmijewski.
On March 24, several activists and artists engaged in the movement #Occupy Geneva who, through the evidence of their activities, play a key role for a comparison between pre-existing political collectives and the extraordinary diffusion of the movement #Occupy.

Friday, March 23 2012, 06.00 – 10.00 p.m.
THE EFFECTS OF ART
The first screening in Italy of Them (2007) by Artur Żmijewski
Talk between Igor Stokfiszewski (literary critic, editor and playwright, member of the 7. Berlin Biennale team) and Salvatore Lacagnina (Head of Arts Programming at the ISR)